The Purifier deals purely physical damage. IC works wonders. He has no adds. Run behind him when he jumps in the air and always run away from his beams. Otherwise, just have ways to mitigate phys or run very fast, or you’re gonna get hurt real bad. This is the simplest Guardian. Meanwhile, enough path of exile orbs is important for you. 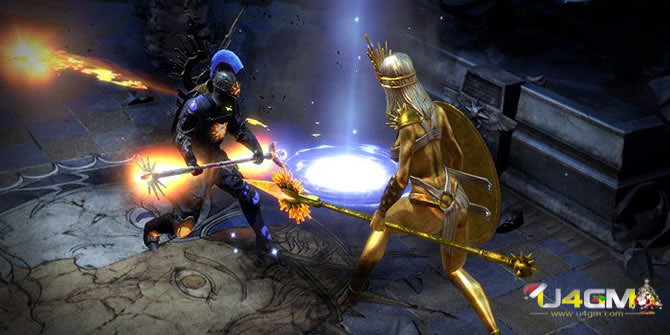 The Enslaver deals partially phys, partially fire. The fire damage deals powerful ignites. Bring flasks with ignite removal – bismuth/stibnite/aquamarine with +charges/-% charges used and ignite removal alongside regular use of IC can make him easy. His melee attacks are pure phys, so if you have a lot of phys reduction/armour, get up close and get his AI to fistfight you rather than spew fire.

The Eradicator is pure lightning spells, no ways to easily mitigate here. Constant movement required. You want shock immunity and a way to deal damage while moving, as he has a lot of energy shield and recharges it fast. The projectiles deal less damage than his spells, so don’t be afraid to bite a bullet to avoid getting caught by his storm calls.

The Constrictor is a bow user that deals physical and chaos damage and constantly slows you. The longer you stay still, the more stacks of “constricting vines” you accrue and the slower you will be when you need to move. He does not use spells, only attacks, so use blind if you can – chance on hit blind, not clouds, as he’ll move out of clouds too fast. There’s pools of chaos damage on either side of the arena and he is constantly moving.

The Elder deals physical and cold damage purely with spells. He fires slowish moving ice spears that will kill you and when in the air will spawn physical explosions beneath you, so again, run when the boss is floating. He has a massive ground effect that deals phys DoT, but there’s a minimum range around him that won’t deal damage, as well as a maximum range at the very edge of the arena. Get in close, else you’ll just get ice speared while pinned to the edge. He slows you and immobilises you and only spawns a handful of adds. Cold mitigation won’t help nearly as much as simply avoiding the spears will, which is your only hope. Good luck!