Justice System adds two opposite sides: Outlaws and Enforcers. Player can join any side. If you want to steal and murder – become Outlaw. If you want to protect citizens and catch criminals – join Enforcers. You can switch between these roles anytime. 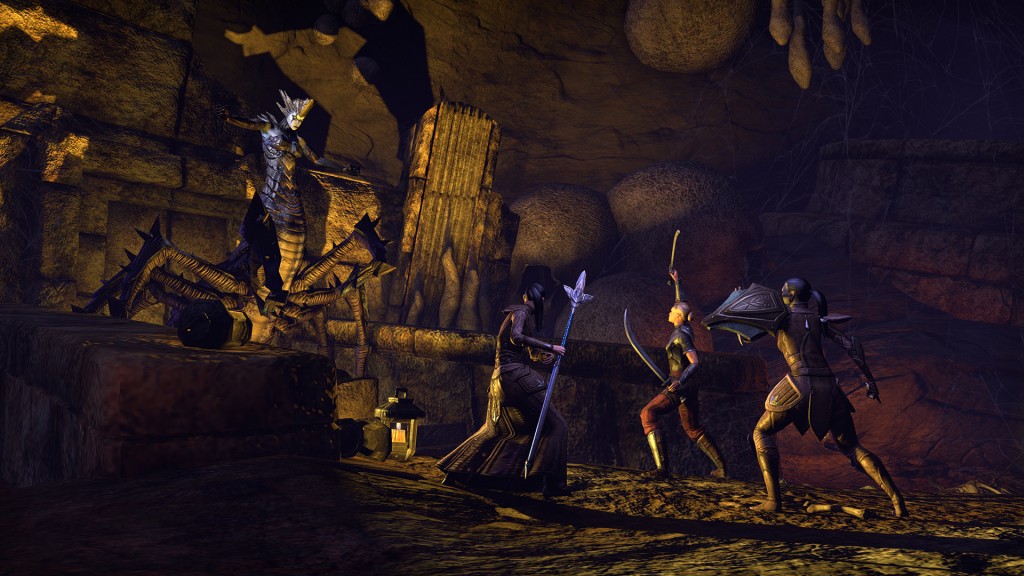 Becoming Enforcer is easy: you need to find one of Enforcer Towers (these towers are usually located near big cities) and talk with NPC there. After you declare yourself as Enforcer you will get a special tabard. Put it on and you will be able to see acts of crimes and bounty level of all players.

Enforcers are patrolling cities looking out for Outlaws and trying to stop them. If Enforcer finds an Outlaw he can stop him from reaching outlaw refuge and selling his stolen stuff. Refuge is a safe zone where criminals can’t be attacked and stopped.

How to stop criminal? Enforcer can attack criminal engaging him in PvP fight. Yes, developers finally added PvP outside of Cyrodiil! If Enforcer wins he can loot corpse of his enemy player and take all stolen goods. These goods must be returned to one of Enforcer Towers. When Enforcer returns stolen goods he receives reward for that.

But an outlaw can resurrect and try to return his stuff back before Enforcer reaches his tower. That’s how this system works in general. Outlaws are hunting easy victims and Enforcers are hunting Outlaws.

Being Enforcer is not a boring duty: you can attack Outlaws and you also have access to special bandit caves. When you travel around the world you come across special clues that give you hints to location of bandit caves with chests and other objects. These chests are filled with stolen items. You can take these items and return to Tower getting reward in return.

Which role is more interesting: being a sheriff or a criminal? It’s you to decide. Elder Scrolls Online doesn’t lock you within one role. You can change the role any time and try both sides. We recommend to try both sides because you will understand behavior of Outlaws and Enforcers. This will help you to act much better when you choose your side.