The Elder Scrolls Online is a massive online multiplayer RPG game developed by ZeniMax Online Studios and originally published by Bethesda Softworks on the PC on April 4, 2014 (under a monthly payment subscription model), arriving at the PlayStation 4 and the Xbox One on June 9, 2015 (a few months after the subscription was withdrawn). The most recent expansion of this title, Morrowind, was released on June 6, 2017 and its official soundtrack has been published, so let’s take advantage of this to talk about the game and listen to the new soundtrack of this video game. 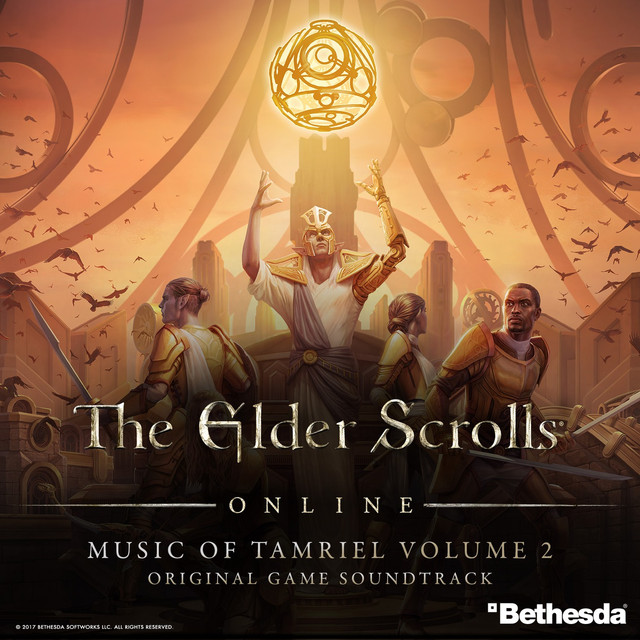 The story in The Elder Scrolls Online takes place in Tamriel (a fantasy world), is indirectly connected to other games of the franchise and occurs approximately a thousand years before the events in The Elder Scrolls V: Skyrim. As a tradition in the saga, the character we select to play will begin as a prisoner who must escape.

Now, we are listening to the soundtrack of the new expansion. This album was composed by Brad Derrick (who has been involved in all the soundtracks of The Elder Scrolls Online) and Jeremy Soule.

The second volume of Music of Tamriel has been published recently. Those who like to hear it can do so in the player that is at the end of the entry (after the soundtracks that we have accommodated chronologically).

1 Landing at Abah’s
2 Hinterlands
3 A World Made of Metal
4 Gold Coast Horizon
5 Anvil: Sun and Shadows
6 Blood in the Foyada
7 Dark Sanctuary
8 The Brass Fortress
9 Looks Peaceful Enough
10 Midnight in Shadow Cleft
11 Sojourn in Kvatch
12 Stealing Sunrise
13 So Many Pockets, so Little Time
14 Sanctioned Murder
15 Where Dreams Become Nightmares
16 Glimmers on the Brazen Horizon
17 A Land Burdened with History
18 Malfunction in the Ventral Terminus
19 I Dreamt of Akos Kasaz
20 Reverie: Sand and Stone
21 Hope Just out of Reach
22 The Order of the Hour
23 All History Is Vengeance
24 Drums, Murmurs, and Lamentations
25 Fanfare in Colovia
26 The Blessings of Morwha
27 The Sky Wheels Slowly Spin
28 Delving the Bane
29 The Long Memory of Minotaurs
30 Back Alleys and Bad Intentions
31 Port of Thieves (feat. Rik Schaffer)
32 Granite and Ashes
33 Tonal Architecture
34 Pensive Meditation, with Pirates
35 Glory of Dawn’s Beauty
36 A Cold Wind Blows from Atmora (feat. Rik Schaffer)