“I think this NDA means I can’t put this TESO footage online.” 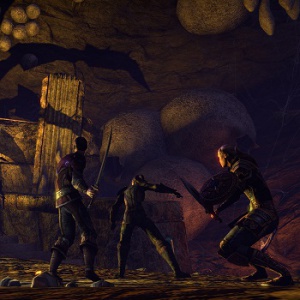 Despite a strict NDA, closed beta videos are often uploaded and commented on throughout a game’s development. It is difficult to stop tools that cannot be detected so the difficulty comes in reacting to these videos making it onto places like Youtube or Daily Motion. Thus far, Zenimax has been pursuing this particular video with the fury of a 5 year old at the whack-a-mole. Each time the vidoes surface, Zenimax Media quickly removes it. Still, this is the internet and it takes very little effort to save the video before it is taken down so it keeps coming up on various sites and eventually, Zenimax will most likely throw its hands in the air and give up.

So what does this footage show? It shows a game filled with introductory quests, skeletons, and wolves. The Elder Scrolls Online gameplay video can be found here though there is no guarantee it will still be up when you read this.

This video shows the similarities TESO shares with Skyrim. This is something of a no-brainer at this point considering Zenimax Online Studios is a subsidiary of Zenimax Media, holding company of The Elder Scrolls creator, Bethesda Softworks. TESO takes place a millennium before the events in Skyrim and seems to revolve around the concept of losing one’s soul and needing to get it back from the oblivion worlds.

Inside the illegally-released footage of ESO, we saw the first few steps of a new adventurer. Here, we saw a UI that looked a lot like Skyrim with a lot of the same callouts and skill ups with a nice long look at the lock-picking mini-game. The nice thing about this world was the thing red outline around enemies that could be attacked. This is important because of the weather effects and lighting the game seems to employ.

Additionally, it seemed as if the player recording the video was getting credit for killing quest monsters that other people had also been attacking. So, it seems as though Zenimax is following the new quest monster protocol of MMOs and allowing multiple people to get credit per kill. Finally, it seems as though Zenimax Online Studios has done very little (yet?) to change the Skyrim UI but it is unknown how this will change as development goes on.

It is important to remember that this game is still in early beta though it is due for release within the next year or two so anything in this video is subject to extreme change. I am curious how PVP will work in this game since it seems that all of the players could walk through each other. Considering the hand current Zenimax Online Studios CEO Matt Firor had in Dark Age of Camelot, I am somewhat hopeful that this game will deliver some grand PVP.

I also want to do what I do in every Elder Scrolls game and steal all the spoons of the world. Oh yes, they will be mine.

You can find more reaction to TESO from our own editor; Greg Tito, who got to play the game at E3. Greg declared that he was sucked in instantly.