The Elder Scrolls Online is We Want

The Elder Scrolls Online has come a long, long way in a short period of time. When last we played the MMORPG, it lacked that definitive Elder Scrolls feeling. Its exploration, combat, and nearly everything else was pure MMO in an Elder Scrolls skin – and it was incredibly attractive.

Zenimax Online has gone to great lengths to tune its online role-playing game toward the Elder Scrolls hardcore. Never mind the recently revealed first-person option. Everything in ESO makes sense in a way typical MMOs don’t. Brawling with wildlife works like it did in Skyrim: They’re simply part of the world, and you’ve stumbled into their habitat. Skeleton armies amass in haunted spaces. Quarantine guards go from good to villainous when you uncover their secret ploy to poison a Morrowind city.

The Elder Scrolls Online does not waste time with petty fetch quests, arbitrary conversations, and meaningless empty space. Like Skyrim, there is always something to discover or uncover. It brings a similar sense of Skyrim wonder to a massive recreation of almost everything that defined the untouchable RPG franchise. I played two hours – one in an early area off the coast of Skyrim. The snowy plains, familiar architecture, and soothing, atmospheric music nailed the Elder Scrolls vibe. If not for the other players lining up to unlock chests (an unfortunate consequence of online play, but not one I understand), I could have been convinced this was a Skyrim sequel.

Combat, in particular, has improved dramatically. Not just from the previous single-player Elder Scrolls game, but from the last version of ESO Bethesda let people play. Where Oblivion and Skyrim lacked the ferocity and physicality you’d expect from a melee-centric battle system, ESO brings convincing weight to its heavy hitting. Smash a skeleton with a hammer and it recoils as though it’s just been smashed with a hammer. Throw a spiritual spear into a mercenary captain and she’ll fall to the ground. Fighting in The Elder Scrolls Online doesn’t feel like an MMO in the way Elder Scrolls used to.

A small, subtle improvement that cements ESO’s commitment to the series rather than the genre is the interface. The clunky map from previous demos has been eradicated in favor of a UI nearly identical to Skyrim, complete with the compass bar up top. Quests are more focused, perhaps because of their narrative coherence and relation to a given area, than the more open-endedness of objectives offered in Skyrim or Oblivion. This isn’t to say ESO lacks the sort of alluring freedom to wander aimlessly – it’s simply more concise and features fewer distractions. Not that distractions aren’t there, mind. 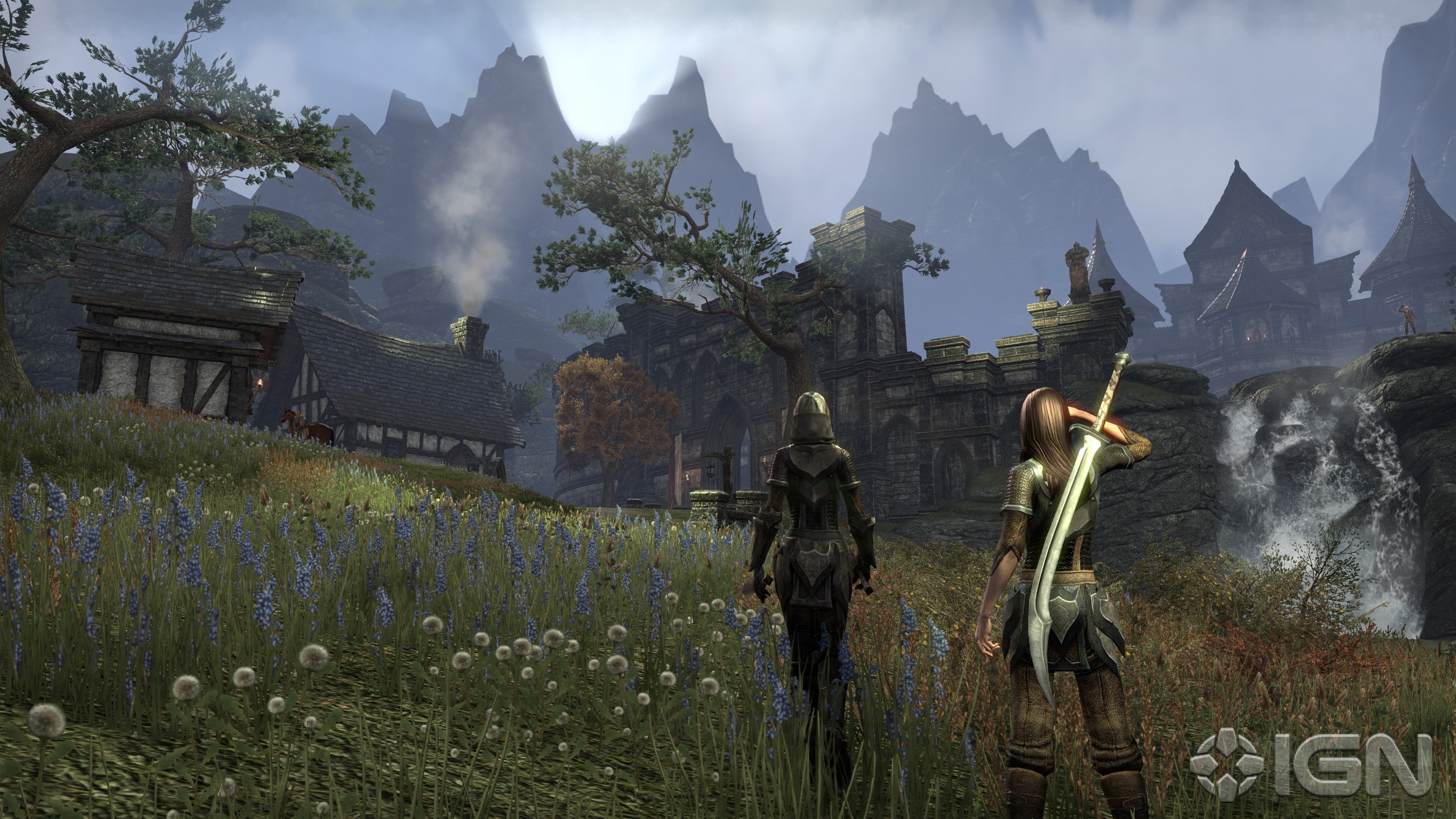 Adventurer camps are fewer and far between, but what you’ll find there is more substantial. Notes about nearby, mysterious fish you can catch which require bait you haven’t yet found. Journals surrounding missing siblings, someone’s issues with authority, or discussions of religious zeal occupied much of my time. Rarely, if ever, will you encounter an arbitrary hunt for a missing book. Mundane quests are dead. Everything in ESO has a story woven through it, comparable to, and arguably done better than, Star Wars: The Old Republic.

Indeed, The Elder Scrolls Online is, at its heart, an MMO, but don’t let that scare you away. ESO manages to make its story content approachable when playing alone while encouraging multiplayer team-ups at later levels. It has no reason to apologize for its MMO-ness, either, because its superb fusion of philosophies. I’ve always found The Elder Scrolls and MMOs equally overwhelming in their grand scope, wealth of options, and liberty to explore. ESO is, despite its gargantuan space scattered across numerous provinces, less intimidating. It eases players into the world and multiplayer by giving them purpose, something to strive for while offering the flexibility to wander tighter areas.

And that’s where The Elder Scrolls is at its strongest.