Infinite skill level gain
This trick requires that you own a house with an alchemy lab. Obtain the Oghma

Infinium book, but do not read it. Go to your house, and open the bookshelf. Read the

Oghma Infinium book, then select the skill set to assign the skill gain. Close the

book, but not the bookshelf. Store the book on the shelf, then take the book back off

the shelf, and select it, but do not read it. Repeat this as many times as desired to

get as much skill level gain as desired.

Duplicating apparel items
Place any apparel item (armor or jewelry for best results) on a mannequin. Then, put

the item back into your inventory. Leave the location of the mannequin, and go to a

different area (for example, exit a house), then return to the mannequin to find the

item still on the mannequin, which you can then take. Repeat this as many times as

Duplicating books
This trick requires that you own a house with an alchemy lab. Activate the bookshelf,

then place the desired book to be duplicated on it. Leave the menu, then immediately

activate the bookshelf again. If your book has not yet physically appeared on the

shelf, wait at the menu screen where you can loot the bookshelf. Once you see the

loot the book from the shelf in the menu. Immediately close the menu, and you can

click on the book itself to read and then take it. You will now have looted the book

twice, putting two of them in your inventory. Repeat this as many times as desired.

It is especially useful with expensive books such as the Oghma Infinium. 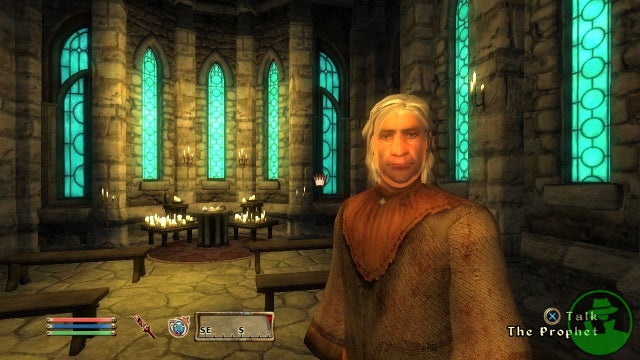 bindings off your hands. Grab the iron sword off the wall in the room. Then, simply

One-Handed skill. Once you knock him down, make sure to not hit him anymore until he

gets back up. To level up the Sneak skill, keep sneaking up on Hadvar while he stands

by the door, and then attack him with the sword. Do this for the first 32 levels.

Once you reach level 33 for the Sneak skill, you can simply sit behind him and hit

him with the sword every six seconds. To level up the Two-Handed skill, progress a

little further in the game, and get the two-handed sword. Once you reach the area

with the bear where Hadvar gives you the bow and arrow, keep hitting Hadvar with the

two-handed sword to easily level up the Two-Handed skill. Note: Do not press [Sneak]

while doing this or Hadvar will move on. To level up the Destruction skill, keep

burning Hadvar. If you leveled the One-Handed, Sneak, Two-Handed, and Destruction

skills to level 100 using this method, you should have 37 perk points and be at level

37 to start the game. Note: This glitch was done on an unpatched version of the game.

Go to Riverwood village, and find Alvor & Sigrid’s house. Inside is a man named

Hadvar. Rest until it is after 8 a.m. so Alvor leaves the house. Sigrid and the young

girl should remain downstairs, and Hadvar will be upstairs. If he is not, just wait

until he comes upstairs. Then, save the game just in case there is a problem during

the next part. Equip your strongest sword or weapon that you want to increase the

skill level for, and sneak behind him until he cannot see you. Do a heavy strike, and

he will stumble to the floor. When he gets up, he will have no knowledge that you hit

him. He also never dies, so it can be done indefinitely. Repeat the process to level

up as much as desired. This will also maximize your Sneak skill, and whatever weapon

type you are using.

Easy gold
Take a horse and carriage to Winterhold. Once in Winterhold, immediately turn right.

Travel southwest from Winterhold to a location called “Sightless Pit”. Just above

Slightless Pit on the mountain is an alter with a skeleton on it. Beside the skeleton

is a book called “The Doors To Oblivion”. Pick up the book, and then kill the

skeleton on the table. Two other skeletons will rise around the alter; kill them as

well. Return to the skeleton near where you picked up the book, and loot its body,

taking everything. Loot it again, and you will notice the book on the skeleton keeps

reappearing. You can keep taking “The Doors Of Oblivion” book worth 50 gold each.

Every time you view the Skeleton’s inventory, even if you do not take the book, it

should add one book to the skeleton’s inventory. Repeat this as much as desired.

Note: This glitch was done on an unpatched version of the game.

At any time, go to Dawnstar. Once in Dawnstar, locate the entrance to the Iron-

Breaker Mine, but do not enter it. To the left of the entrance are some rocks around

a tree. Walk under the tree, and aim your crosshairs around the edges of the rocks

until “Search Chest” appears. Open it to find a large amount of free loot, including

is invisible as it sits under the ground, but it is still lootable. Loot everything,

then sell the items for a large sum of gold. It is recommended you bring a horse, as

you will quickly become over-encumbered and unable to move quickly or fast travel. To

reset the chest and get more loot, go back to the entrance to Dawnstar. You will see

a Khajiit trader caravan. If the caravan is not there, wait a few days for it to

return. Look for the Khajiit named “Ahkari”. Save the game while looking at her, then

attack her after saving. It is not necessary to kill her, as damaging her should be

enough. Then, reload the saved game file, and talk to her. Ask to see her wares, then

exit the “Trade” menu, and return to the invisible chest by the mine. Repeat this

process as many times as desired.

When doing the quest to get married, marry a follower. Then, make them follow you and

trade items. They should have 750 gold because of the store they run. Take their

gold, leave, and wait one day to get more gold. Repeat this as many times as desired.

While doing the quests to get the “One With The Shadows” trophy, you will get a

special request for Windhelm called “Summerset Shadows”. Once you have completed this

quest, Niranye will have 4,000 gold on her every two days. Keep stealing as much gold

from her as desired. It is possible to steal almost 145,000 gold in thirty minutes.

This also is an easy way to get the “Golden Touch” trophy.

At the beginning of the game, when you reach the first town of Riverwood, find Hod.

He usually stands at the top of the sawmill during the day. He will pay you for as

much wood as you can give him. There is no limit to how much you can make by chopping

wood and selling it to him, as he never runs out of gold like the merchants. Chop and

sell as much wood to him as desired for easy gold.