Seriously, you should craft in Elder Scrolls Online 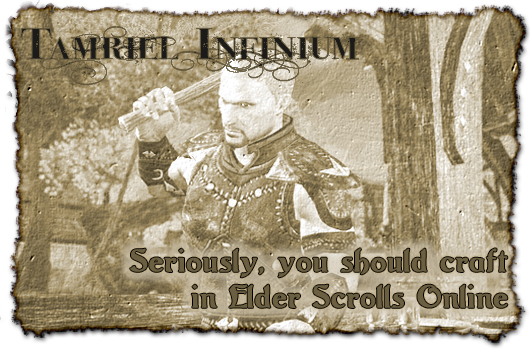 I’ve come to the conclusion that Elder Scrolls Online is not a game you want run through quickly. If you fly past each town just running from quest marker to quest marker, you’ll miss some of the most important things the game has to offer and burn-out comes that much faster. In the first day, we had a player reach max level in less than 18 hours. Of course, some players cry “exploit,” but for me, that’s not really the point. I would feel I was missing something if I rushed to the end. And because I didn’t rush to the end, I can try out some parts of Elder Scrolls Online that I would not even think about trying in any other MMO, like crafting.

I have a long-standing angst toward crafting in MMOs. I played Ultima Online, but I didn’t really craft in that game. I didn’t start to understand the importance of crafting until I played Star Wars Galaxies. As we know, crafting was central to the success of that game. But after ZeniMax announced that an auction house would not exist in ESO, I wrote off crafting as unimportant and ultimately a waste of my time.

Then late in beta, a friend of mine crafted a set of armor for me. I was surprised. The armor she made was better than my looted armor. I had to find out more. I put this little primer together for those who want to get started making their own weapons and armor.

Personally, I started with blacksmithing because I’m focusing on heavy armor. But if you are leveling up a non-tanking character, it might be more beneficial for you to start with clothing. Luckily, the basics for blacksmithing, clothing, and woodworking are pretty much the same. Although I will focus on blacksmithing, you can apply these same principles to clothing and woodworking.

Most of the time in other MMOs, I will gather materials from the world or harvest mats from world monsters. You can do that in ESO, but I don’t recommend that you make that your primary way of gathering materials. I would learn deconstruction. Actually, it’s not that you have to learn it; you just have to do it.

In other MMOs, we would usually sell unwanted armor and weapons to a vendor, just as we would do to any junk item. I have yet to find any item in ESO that is truly junk. All items can be deconstructed into its raw materials, then those materials can be used to create new items. For instance, the helmet I made for my level 1 character with five iron ingots and one piece of nickel can be deconstructed to give me back the nickel and two ingots. I can immediately turn around to make those materials into another piece of armor or weapon. You break down metal weapons and heavy armor at the blacksmithing stations, cloth and leather armor at the clothing stations, and staffs, bows, and shields at the woodworking station. The amount of materials returned is random, but it will always be based on the item you’re deconstructing. In the end, the materials will be worth more than the price you’d get from a vendor.

Just because deconstruction is so profitable doesn’t mean that traditional gathering isn’t worth anything at all. In fact, for certain items, like the clothing material jute, I’ve found gathering to be far more beneficial. And I have also found an add-on that will simplify gathering if you enjoy wandering the countryside for raw materials.

All manner of materials can be found in the world. All of those silly items players find in crates and urns can be used in crafting. However, most of the materials players need for blacksmithing, clothing, and woodworking are not in those crates; they just sit in the grass or under ledges. And unlike resource nodes in other MMOs, ESO nodes can be difficult to see. Like the jute I mentioned before, flowery materials will hide themselves in tall grass. But if you are serious about gathering materials, you can uses a skill point to help you find those items more easily, which means that the nodes will glow when you’re close to them. 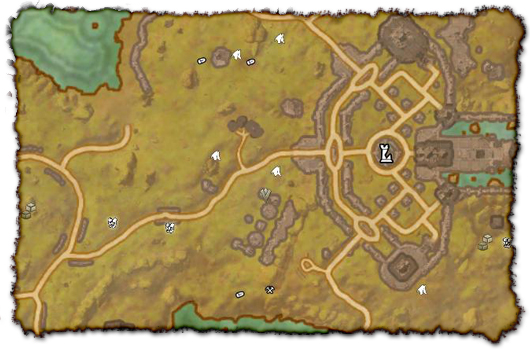 Another item I use all the time is ESOHead’s HarvestMap. The idea is simple: When you find an harvesting node on the map, the add-on records it and will save the location. Because materials will always spawn in the same location, you can use the map to periodically recheck the spawn points for new raw materials. The map also indicates what type of material it is. I would also suggest that you useZRMiniMap so that you don’t have to continually flip back and forth from the map to gameplay.

Lastly, we can’t talk about crafting without dipping into making items.

I consider enchanting, provisioning, and alchemy to be a bit more advanced crafting. Serious crafters take on those tradeskills, but for me and the rest of the playerbase, we just need to know how to craft our own weapons and armor. And because crafted weapons and armor will always perform better than dropped items, it’s in your best interest to at least learn the skill that will benefit you the most.

Basic crafting will require refined materials and an item specific to your motif. As I mentioned earlier, my level 1 helmet required five iron ingots and a hunk of nickel. I require nickel because of the Imperial motif (or look) of the armor. Other racial motifs require different items; the Wood Elf motif requires bone, for example. Most of the motif-specific items can be bought from the blacksmithing vendor. And the more refined material you add to an item, the higher the level. For instance, adding six iron ingots makes the item level 4.

Refined materials can be found from deconstruction or from refining the materials you gathered. Each refined item requires 10 raw items. For instance, one iron ingot requires 10 pieces of raw iron ore. That’s easy enough, right?

That is enough to get you started, but ESO crafting obviously runs deeper. I will touch on researching and improving as well as the other crafting skills another time. But at this point you should be able to make your own armor and weapons and not die as often when you get into a fight. If you have any questions, let me know in the comments, and I will see you in two weeks.