Standard by admin August 8, 2013 No Comments

Most notably, Watch Dogs and Destiny transcended genre favoritism to beat both The Witcher 3 as the games RPG fans are most interested in playing. 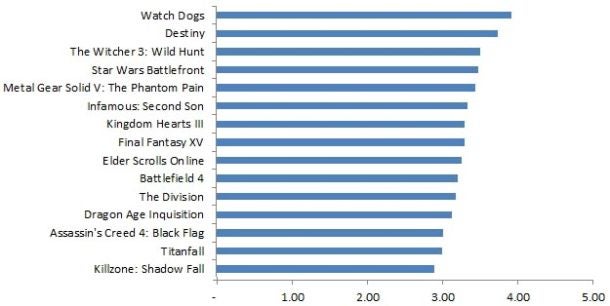 Open-world action game Watch Dogs was voted as the game most anticipated by those who play RPGs almost exclusively. Bungie’s shooter Destiny, which ranked second among hardcore RPG fans who took the survey, is perhaps less surprising — RPG fans may be attracted to its role-playing elements, such as character progression and class system.

Also of note among the survey, in which users who play RPGs almost exclusively ranked the games they’re most interested in, is that RPGs ranked comparatively low compared to other genres. Next up, users chose Metal Gear Solid V: The Phantom Pain, and Infamous: Second Son as their most-anticipated games.

Behind those games is Battlefield 4, which ranked higher than RPGs such as Tom Clancy’s The Division and Dragon Age: Inquisition.