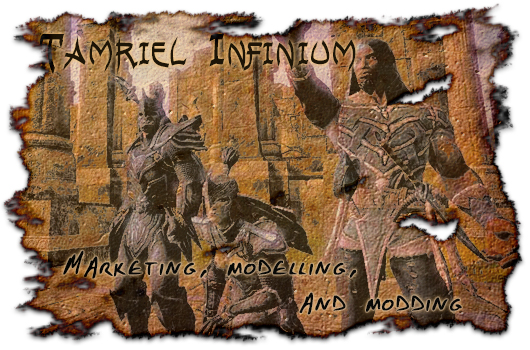 I knew Massively readers would have a lot to say regarding the release date for the Elder Scrolls Online and how it measures up against other upcoming MMOs, but I had no idea about the breadth of topics that would come up.

We heard the old standard, that nothing will ever beat the two-ton gorilla, World of Warcraft. Other readers argued that other games releasing about the same time are so much better. But what I’m most interested in is in the deeper discussions about why one franchise would choose one date while another would choose to wait. And because I included the launch-day-announcement video, readers had an opportunity to give their input on the aesthetics of the game as well as the overall expected performance. These topics also sparked discussion on modding for ESO.

I love all these topics and frankly couldn’t settle on one to talk about this week. So I’m just going to hit on them all: marketing, modeling, and modding.

It’s no secret that WoW has lost subscribers over the last few years. Reader Trickykid mentions that it lost three million subs since Mists of Pandaria. And just as I alluded to last week, Blizzard has to keep an eye on its competition. I was scorned by commenters who misinterpreted my statements, believing that I thought that WoW was afraid of the upcoming competition. I don’t think it’s afraid, but there is no reason to risk sales unnecessarily. I believe WoW‘s publishers will do exactly what Trickykid suggested:

“I do imagine they will time their Warlords of Draenor beta to coincide with the other two release dates,” he wrote, “but Blizzard would be quite wise indeed to delay WoD‘s release until late summer or the autumn. Let the others release and be reacted to, then welcome folks back with an old-school Warcraft expansion a few months later.”

This seems to be the trend. If we look at past years, we can clearly see that Blizzard knows when to launch its expansions. Wrath of the Lich King launched a couple of months after Warhammer Online, andMists of Pandaria launched shortly after Guild Wars 2. Commenter Arktourosx put it succinctly, “The same thing will happen with ESO. All those people who are disenfranchised by the game after the first few months will… boom… get a new WoW expansion.”

The real question for marketing revolved around the target audience of ESO and just whom the publishers are trying to reach with their current marketing strategy. Perhaps because I’m entrenched and bombarded with ESO news, as I am with any game that I follow (even before working at Massively), I forget what the average person actually knows sometimes. With only 105 days left before launch, reader Jealouspirate finds himself with surprisingly little information about the game. “A lot of the messaging around it is conflicting and terribly vague,” he wrote, “The devil is in the details, and details seem to be exactly what we’re missing with this game.”

This week, I’d like to know, because I want to be able to give you as much as I can in this column, are the details of ESO light? Do we need to know more? Do we not have enough information to make an informed decision about the game? If so, what information do we still need to find out? I will endeavor to do that for you over the next 105 days.

Reader Sharvis and Massively Editor Bree discussed modding in regard to the marketing of ESO. As some of you know, I was huge into the modding community of Star Wars Galaxies. I enjoy the mods forSkyrim and other TES games, but I wouldn’t call myself a modder in that community because although I use the mods, I don’t make any mods for the games.

The discussion of modding came up because ESO is going to allow only UI mods, and it’s believed that the modding community had a lot to do with the sustainability of Skyrim. There might be a small kernel of actual evidence to back that up. According to VGChartz, Skyrim sold about 16 million units since its release on 11-11-11 across three platforms. Xbox 360 being the most popular platform, which isn’t too telling if the product is bought then immediately discarded. But I think what would be telling is if the PC community had the largest percentage of growth over the last couple of years because you can’t mod the console game. The PC sales were halved (47.3%) from 2011 to 2012 and then only dropped 39.5% from 2012 to 2013. But in terms of actual numbers and not percentages, both consoles sold more units after the first year and the year after that. But if we look at percentage of sales, both Xbox 360 and PS3 saw a more significant drop. The first year’s sales dropped 60.4% for the Xbox 360 and 50.1% for the PS3. The 2013 percentages were about the same. I see some evidence that modders might be right.

I do appreciate Sharvis attempting to curb expectations, even though he called some people stubborn.

I’m of the opinion that people are stubbornly viewing TESO from the mindset of the single-player series, and it’s highly unrealistic. MMO’s are inherently different, and yes, certain sacrifices are made to translate the universe into an MMO. I’m not saying that’s not a drawback; yes it can be, but I think it’s unreasonable for people to actually call for things like full modability.

But a player expecting a similar experience from one Elder Scrolls game to another isn’t unreasonable, especially given supplementary evidence that modding might actually play a significant role in player enjoyment and box sales. Bree said in the comments last week:

That’s just it, though — taking a sandbox single-player game and turning it into an MMO themepark is weird and unnecessary. Modding is all about telling players, here’s our thing, now do whatever you want with it. I don’t think it’s the players being unreasonable by expecting that same underlying philosophy inESO. They’re just not going to get what they expect.

Even though I do like what I’ve seen of ESO so far, I do have to consider Bree’s words, “I am constantly struggling to understand whom precisely this game is for” from a marketing standpoint at least. Unfortunately, I don’t have a real conclusion for these ideas, but I hope its food for thought.

Next week is the New Life Festival, so happy holidays, and I’ll see you again next Friday.