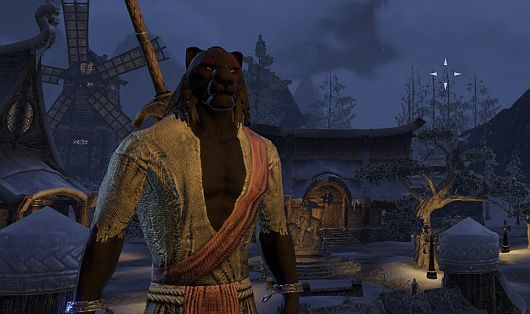 I’d like you all to welcome your new character in The Elder Scrolls Online: Fa’saad! Get it? Fa’saad…like façade because he’s a sneaky Nightblade … oh nevermind.

The character you created for me is a male Khajiit Nightblade from the Ebonheart Pact. I will be playing him for the rest of the month from the perspective of a veteran MMO gamer who is excited to see what this year’s triple-A MMO can bring to the table not only for MMO fans but for fans of the Elder Scrolls series. This week’s article will be an introduction to the character and more polls for you to vote on to help this character progress in the early game.

First off, let me explain a bit about Sunday’s livestream fiasco. For those of you who attended, you got to see, as one viewer put it, how to troubleshoot OBS (Open Broadcaster Software). In short, there were some technical bugs that weren’t there for the dress rehearsal, so the stream was a bust. But I will try to stream the game again at a later date that I’ll announce on the Massively Twitter. I know that streaming Choose My Adventure is a big part of it, so we’ll get that worked out. 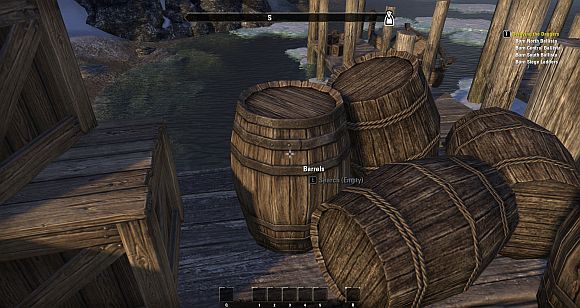 As for Mr. Fa’saad, he has run through the tutorial (for the lootz!) and is now level 5, sharpening his claws as he waits for further instruction. I haven’t spent any skill points yet because I want you to help mold his class, but there’s still enough to do quest-wise that that’s not a big problem yet.

Crafting will also be up to you. If you’d like me to not even focus on crafting, that’s part of this week’s poll, too, but if you do, the crafting choices are all there. I will focus on the number one and number two choices in the poll (unless you choose no crafting).

Weapon focus will be at my discretion, mainly based on what I feel most comfortable with. But suggestions on favorite Nightblade combos are certainly welcome!

At this point in the game, I’m really enjoying myself. ESO has the main staples you’d look for in an Elder Scrolls game (or Bethesda game in general), including rich storylines, ample quests, and the ability to loot almost everything you see around you. I think the devs really hit that nail on the head because they knew that these are the things we’d be looking for. We play these types of games to find new and exciting challenges, but we play a familiar and comfortable IP like Elder Scrolls because we trust that it will be something we know we’ll enjoy.

Progression through these first five levels is easy, and I actually like the fact that I’m still relatively powerless at this point. I have a nice green two-handed sword I found lying in a crate, and I got some new britches from a quest reward, but other than that, I can get my butt handed to me if I venture off into the wrong part of town (or dungeon). And I think that’s how a good MMO should be: It should keep us wanting more. Make us think about strategic ways to accomplish challenging goals while we’re away from the game.

I’ve also run into more than a handful of broken quests, which is frustrating considering I’m only level 5 and this game has been in testing for a long time. But luckily, there’s still plenty to do, and I haven’t encountered anything game-breaking yet. 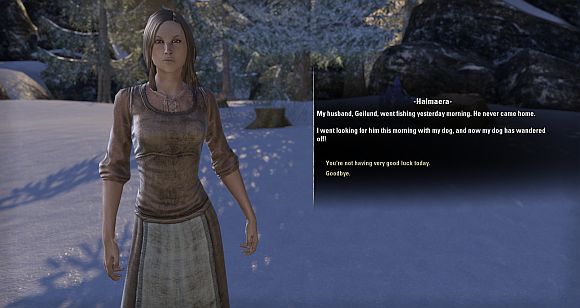 Environment-wise, I find the immersion factor is pretty high in this game. I enjoy the NPC voices all around and the depth of story with just about anyone you talk to. I really like the fact that, by default, I’m not seeing character names blocking up the scenery, breaking my mind.

But I do find the graphics (including animations) to be lackluster, especially since I know the dev team is capable of so much more (see also: Skyrim on a nine-year-old Xbox 360). It’s not that they’re bad per se, but I just expect more from the company and the current state of the game’s competition, visuals-wise.

With the amount of gold-selling spam in general chat and my in-game mailbox, I would hope thatBethesda/Zenimax Online streamlines the reporting process to let us quickly report a gold spammer without taking us out of the game for two minutes at a time.

Combat is a blast; it reminds me a lot of Age of Conan. In fact, it might sound strange, but this whole game seems very Funcom-esque. The level of depth approaches that of The Secret World (almost!), and the action combat is really a lot of fun. I enjoy finding parts and pieces of new games that remind me of other popular titles because it keeps things familiar but not too familiar to be boring and predictable.

My favorite parts so far

My least favorite parts so far

I also had an idea I wanted to introduce to you regarding the way Choose My Adventure will run going forward. Since we’re not trading the CMA duties among the whole team anymore, I figure it might be nice for me to keep these CMA characters in each game and revist them every few months. So instead of focusing on a new game every month forever, I could come back to TESO in a few months and play this same character again through the mid-game so you can see how he has progressed and decide how his path might change. That way we can skip character creation and you can just choose my adventures on the established character. This includes previous CMA characters I’ve made in other games.

Sound good? Let me know in the comments. Be sure to get those votes in for crafting and class focus before Friday at 12:01 a.m. EST so I can play your choices this weekend. And come say hi if you see ol’ Fa’saad running around Tamriel looting crates.