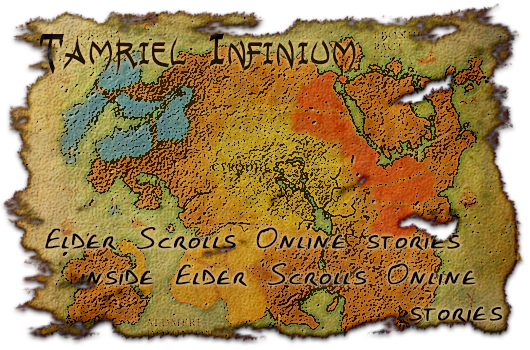 I admit it: I’ve spent hours in Skyrim and Oblivion doing nothing but reading the dusty books on the shelves of some dank dungeon. A lot of those stories repeat themselves, but I’m still amazed at the amount of time the writers put into the legends and lore of the series of games. For instance, if you’d like to know how Tamriel came to be, you can pick up The Annotated Anuad, the genesis story of Nirn, inSkyrim, Oblivion, or Morrowind. The book has little to do with any of those games, and the absolute truth of that book is suspect considering it’s a “children’s book.” But it’s a testament to how much time the writers put into developing the lore surrounding the Elder Scrolls.

We know that The Elder Scrolls Online will also contain its own share of books and lore-packed tomes. Maybe you even spent time reading some while you were in beta this past weekend. Unfortunately, we can’t gab about that, but we did get a taste of some of the stories thanks to the interactive map on the official website. Over the last couple of days, I’ve read each piece in this map, and surprisingly, I found some completely new stuff. Let me tell you about my top six.

The first entry on my personal list gives us a hint at what part of the Daggerfall Covenant story will focus on in ESO. Although I’m hoping that this isn’t the thrust of the main story, I am very interested in playing some side quests involving werewolves. There are also rumors floating around that there are actually werewolf ability trees that you can scale. I guess the only way to find out is to travel to Rivenspire and be bitten!

The Howling Threat Approaches! All of Glenumbra in Danger!

“Werewolves are not a real threat to me,” you laugh. But YOU ARE WRONG! Werewolves have been sighted more and more frequently in the woods, and I have seen one with my own eyes.

Ignore this message at your own peril. Stock up on canis root and keep your children indoors. Do not leave your flocks unattended! Petition the Duke to increase the watch — he has ignored my repeated requests and puts you all in serious peril!

It’s almost cliché to like the Nord because of Skyrim. The Nord may or may not be the most popular race to play, but the barbaric northmen are very likeable people. And their stories! If you’ve played Skyrim (and who hasn’t played Skyrim?), then you know the grand tales the Nord can tell. We don’t know whether all the stories are true, but to be honest, I really don’t care. The Eastmarch section of the map tells us the yarn of Vikalar and how he earned the name Skull-Shatterer:

In days long past, Vikalar and his hunting party celebrated a successful hunt around their campfire, drinking their fill and telling tales. The mead was strong, as it always was in those days, and the spoils many, but no mammoth-hides were among them, though Vikalar had sorely hoped to challenge one that day.

“I could fight it with my bare hands!” he boasted, roaring his battle-cry into the dark beyond the fire’s light. To the party’s shock, a trumpeting blast sounded in answer. The ground shook, and out of the darkness charged a massive mammoth! The beast trampled straight for Vikalar. As the others [dived] aside, he charged it head-on, leapt into the air, and crashed his skull against the mammoth’s. To the great surprise of the party, the creature wavered, stumbled, and fell to the ground, stunned. To this day, none has boasted a skull the likes of Vikalar Skull-Shatterer.

I’m not sure how well the Nords and Dunmer actually get along; the Pact is obviously a marriage of convenience. The Dark Elves clearly don’t like the uncivilized. They enslaved the Argonians, after all. If all Dunmer children are told this story of how a boy was turned into a Kagouti, then it’s no wonder that they are uptight most of the time. Or maybe this is just their way of getting their children to eat their greens.

There was once an unruly boy who refused to respect his elders.

“Eat your bittergreens,” commanded his mother, and the boy said, “I won’t!”

“Bow your head to your ancestors,” commanded his father, and the boy said, “I won’t!”

And so it went, day and night, until one afternoon when the boy explored the nearby fen. He smelled the scent of sweet yam pie and followed it to a strange house. The pie sat unattended on the sill, and he made to grab it when an old man came forth.

“If you wish to behave like a wild kagouti, then so be it!” cried the wizard.

Just like that, the boy became a kagouti. He ran back to his home and roared in despair, but his father chased him away with a shovel, for everyone knows kagouti are dangerous and diseased. Never again would he play with his friends or enjoy his favorite treats. Don’t make the same mistake as the boy who became a kagouti.

The Altmer are jerks, right? OK, maybe not all of them, but their royalty likes to have certain things just so. This letter from a princely aide makes me smile, not because I’m particularly fond of Altmer but because of the mention of the Prince’s nose. I’ve always found Altmer noses to be super-long and odd-looking. It’s great when game writers don’t take themselves too seriously all the time.

In response to the ridiculous question you asked in your previous correspondence: yes, you are to continue work on the statue even in light of Princess Ayrenn’s return. The Prince is royalty, and he deserves a new statue to be added to the gardens regardless of whether he is to become king.

I have sent to you Prince Naemon’s favorite portrait to use as reference. The Prince had some additional notes for you, as well: please make sure that you represent the noble angles of his nose appropriately. The last mason did a pathetic job in this regard. Make sure to represent his noble bearing and the correct shoulder width, and please do not make his legs look like sticks!
We look forward to reviewing your work and expect nothing short of perfection.

Bretons pride themselves on being some of the best sorcerers in all of Tamriel. Most of the time these mages are considered staunch and uppity, but apparently, they can be fun-loving and mischievous, too. Something tells me that the little Daedra who escaped the Summoning Room didn’t do so completely by accident. The note makes me giggle every time I read it.

Attention all Guild members! You must obtain permission for use of the Summoning Room and its equipment. Mages Guild regulations require an overseer’s presence during Conjuration practice on Guild premises. We will not tolerate another episode like last week’s little scamp escape, so DO NOT use the Summoning Room without an authorized Guild member present.

Additionally, to [whoever] thought it was funny to replace the Alchemy Lab’s spore pods with reekroot seeds: we know who you are. If you continue to show disrespect towards your Guildmates and Guild property in this way, we will be forced to revoke your membership. To everyone else: you’ll have to tolerate the smell until we can neutralize it.

Lastly, I leave you with a Bosmer lullaby and ask you a question for next week’s article. There are many poems and books all over the Elder Scrolls stories, from the tales of Lifts-Her-Tail to the histories of Talos. Which ones are your favorite, and what makes that particular story stand out to you?