Standard by admin August 3, 2013 No Comments

The Elder Scrolls Anthology brings together all five games from Bethesda’s epic RPG series, plus the official add-ons and five printed maps. 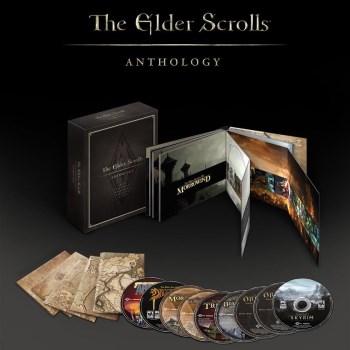 If you’ve never before enjoyed the pleasures of Bethesda’s Elder Scrolls RPG series (and you have a taste, or at least a tolerance, for older games) then The Elder Scrolls Anthology may well be the perfect place to jump in. It’s all five games in the sprawling RPG franchise – Arena, Daggerfall, Morrowind, Oblivion and Skyrim – plus the Tribunal and Bloodmoon add-ons for Morrowind, the Knights of the Nine and Shivering Isles expansions for Oblivion, and Dawnguard, Hearthfire and Dragonborn for Skyrim.

And that’s not all! The package also comes with five printed maps of Tamriel, the Iliac Bay, Morrowind, Cyrodiil and Skyrim, and a super-sexy box that will class up any room.

“But wait!” I hear you say. “What about Battlespire and Redguard?” To which I reply, “Tone it down, pal, nobody wants to play those anyway.” More to the point, one is an “adventure” and one is a “legend,” which I guess means that they’re technically not part of the Elder Scrolls continuity. It seems to me like a mighty fine hair to split but the bottom line is that they’re not part of the package. Sorry.

Arena and Daggerfall, being the old boys that they are, will run within DOS emulators, while the rest are new enough to run straight-up. The Elder Scrolls Construction Set for Morrowind is crammed in there, too, for those who feel like cooking up their own adventures in the land of the Dunmer (and what I maintain is the best Elder Scrolls game of all). The Elder Scrolls Anthology launches on September 10 and will set you back $79.99. Oh, and it’s PC only. You may commence gawping at elderscrolls.com.