Be aware of the components of the elsweyr in TESO

Standard by admin November 22, 2013 No Comments

It is obvious that being aware of the components is greatly beneficial to our playing when in the elderscrolls online. Well, Elsweyr is a province in The Elder Scrolls Online. 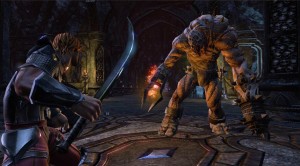 Under the elder scrolls online elsweyr, there are two locations you ought know, including cities and islands. In the meantime, there are two parts exist in the cities, including Dune and Fort Sphinxmoth, and the island is Khenarthi’s Roost.

After the rough comprehension to the components, it goes to the Elsweyr itself. The province in the elder scrolls online is ruled by Queen Ayrenn, and under control of the Aldermeri Dominion, and is the homeland of Khajiiti. Currently, most of the Elsweyr is in the grip of Knahaten Fluis, which is a deadly disease that affected much of Argonia in the second era.

Besides, the southern Elsweyr are under the rule of its merchants, farmers, and arts that have long-established Khajiiti nobility, while the northern deserts of Elsweyr are ruled by tribal chiefs as the nomadic tribes. Under the circumstance, the mane, who is the Khajiiti spiritual leader, combines these two ways of life into one culture.